To share your memory on the wall of John Ross, sign in using one of the following options:

John was born in Recife, Brazil to Archie and Katharine Ross who were living there while on
business. They moved back to the states a few years later and he grew up in Ardmore, PA for most of his
youth. He spent his high school years at Bordentown Military Institute then went on to the University of
Toledo. It was while there he met and married the love of his life he affectionately called St. Sue.
After graduating from U of Toledo and ROTC he was assigned to Schofield Barracks in Hawaii
where he and his new bride spent one glorious year that neither of them forgot. 1st Lt John Ross was
sent to Vietnam in 1969 where he was awarded the bronze star. The discipline and patriotism he
learned in the Army never left him, as friends and family will attest. It made him amply prepared for his
next 42 years in the private sector. John made his career in the medical device industry which
culminated as Global VP, Health Economics for Medtronic and later KCI-Kinetic Concepts.

In 2011, John and St. Sue retired to Edgecomb, ME where he spent his summers at his family
cottage on Squirrel Island to be near both their daughters and four grandchildren. He volunteered at the
Maine Maritime Museum as a docent which he thoroughly enjoyed and treasured. Their last
adventure’s were spent on a yearly trip to Hawaii with Sue’s sister and brother-in-law, Beth & Doug
Henson. They looked forward each year to returning to where their love story truly began. One of their
favorite things to do would be to sit out on the moonlit veranda nightly, while John would serenade his
guests with songs of John Denver whilst playing either his banjo, guitar or ukulele.

Due to current circumstances there will be a memorial on Squirrel Island at a later date.
In lieu of flowers please consider donating to: mainemaritimemuseum.org-Under the tab Give and then
Donate.
Read Less 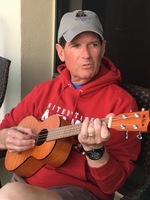